Most know the quote, “Greater love has no one than this, that he lay down his life for his brothers,” which is found in the Bible in John, chapter 15.

Active military personnel understands that phrase, as do many who signed up for service or, in the old days, were drafted, either did so by serving and some by sacrificing their lives.

Craig County residents take tremendous pride in honoring every service man and woman each year with an annual HONOR dinner.

On November 10, approximately 120 vets and their families entered the local VFW Post #4491 for an afternoon of reflection and comrade fellowship at the Ninth Annual Veterans and Active Military HONOR Dinner.

Over 30 volunteers assisted Director Pam Dudding in hosting an afternoon of honor, respect and love.

Darren Frango was responsible for the valet service. His volunteers, Wayne ‘Bigfoot’ Belcher and Clemeth Hannah, were attentive and directed everyone to a safe spot while greeting them with a warm smile and handshake.

Betty Dudding and Barbara Davis registered each family for door prizes, and guided them into the decorated dining area.

Attendees were then greeted by Dawn Hannah and Mary Hodge as well as many teens who volunteered to serve their hometown service people.

Those who wanted to serve was as young as nine. Several service families complimented them on service and warm smiles.

When guests were seated at the decorated tables done by Debbie Caldwell and Robyn Foster, they noticed the handmade cards and patriotic napkins courtesy of students at McCleary Elementary.

Sandra Ruble and Minnie Guthrie greeted guests by handing out gifts from Guthrie Insurance and other local businesses.

The kitchen crew, led by Lynn Elmore, had the food organized for fast dipping and serving. Elmore has been on the committee for a few years and knows how to get the meals out efficiently. “I love doing this for our military. I have brothers who served,” she said.

The afternoon began with a prayer offered by Ken Looney. Said the Chaplain of the VFW Post, “We ‘Thank You’ Lord that you have blessed us with brave men and women who were, and who are, willing to defend our freedom, no matter what the cost or sacrifice may be. May Your loving protection and grace surround them this day, and every day, wherever they may be. Let your healing hand be upon those who suffer wounds and injuries and may those who have made the ultimate sacrifice, rest forever in Your Holy Presence, and please Lord, comfort the hearts of their families who mourn, as they remember the precious lives of their departed loved ones, and the sacrifice’s they made. No, freedom is not free. All who served paid some, but some paid it all, to defend our blessed nation.”

The Pledge of Allegiance was led by the local Craig Valley Daughters of the American Revolution (DAR). During the National Anthem every hand was held close to the heart, while all eyes were on the flag.

The meal served included: roast beef and gravy, macaroni salad and coleslaw from the Moose Lodge on Rt. 311, homemade mashed potatoes from Pine Top Restaurant, old-fashioned green beans that had been cooked overnight from Jean Bradley, angel eggs from Lynn Elmore and her friends and hot rolls from the DAR ladies.

The 16 volunteer servers circled the kitchen many times to get out all of the family orders. Though there were a few hiccups, everyone was appreciative of the meal. “I never expected to get this kind of meal and service,” said a first-time attendee before adding, “I’m overwhelmed with it all.”

Many of the kids who volunteered had smiles a mile-wide as the families thanked them and encouraged their great work. Some rushed back to the kitchen to get more while others refilled drinks.

Darlene Stanley and her daughter, Whitney, made sure that all of the drinks were in order and that coffee was accessible to serve despite the coffee pot not working properly.

The meal was topped off with homemade desserts from Diane Givens, Barbie Winstead and other ladies from Craig. “Can I get seconds on this?” asked one volunteer. Because there was plenty to go around meeting that request was no problem. To-go meals were provided to anyone who had someone at home or wanted to deliver to a Veteran or spouse.

In the background was soothing and uplifting music provided by the talented David Givens, also a Veteran. His business – Dave’s Live Sounds – provided the microphone system and large TV to view the videos and honor clips.

After the meal, the DAR ladies shared the Fallen Soldier Table message, where they placed different items on a round table with an empty chair in honor of all the fallen soldiers from Craig County. The deep silence spoke volumes. Then, the names of all Veterans who have passed on in the last year were announced and an additional time of silence was given.

Pam Dudding shared a prayer and words of appreciation to every military person and family who attended. She said, “Many of you gave and some are still giving, to secure our walls, borders and individual homes of every United States American. May you always know that you are loved and appreciated for all you have done for our country, our community and for us, as individuals.”

A moment to honor each branch was given as the military song played in the background. Afterward, Givens played individual branch commercials and those who served in that branch rose and introduced themselves.

“This moment will never get old for me,” Dudding added. “These men and women honor one another, listening intently to each other, clapping with respect as each introduce themselves. It’s a very special time in our program.”

Givens played a moving video titled I Fought For You which portrayed Veterans in a theatre with different family members, watching battling excerpts from various wars. As the Veterans watched intently, some kids played with their video games. As the tribute progressed, the children became more attentive to what their grandfather was watching. One by one, the Veterans softly laid hands on their family members saying, “I fought for you” until all eyes were on the screen as it panned fallen soldiers.

Also shown was a 50th Anniversary honorary video for the Marines. At the end, all of the Marines in the building gave their “OOHWAH” shout out.

Terry VanCourt and Bob Lavelle sang as each played their guitar, providing an entertaining selection of music.

Post #4491 Commander Billy Lee shared with everyone the ‘Veteran’ status to join the VFW and welcomed any new members.

Towards the end, over 100 door prizes were given away. Betty Dudding, at 80 years of age and battling stage three kidney failure, said she was determined to have some nice door prizes this year. She traveled to Roanoke and Salem on five occasions to collect from businesses. Lynn Elmore followed suit, as she also collected various prizes in Salem. “We are so grateful to our neighboring businesses in Salem and Roanoke which nearly everyone in Craig frequents,” said Dudding and Elmore.

Donors were more than generous this year. Locally, Guthrie Insurance Agency donated many giveaways in addition to making a generous donation. Many other local businesses gave generously as well. “We feel they deserve our respect and honor and we wish to help in whatever way we can to make the dinner a great success,” various local employers noted.

Many military veterans and their families were in “awe” at all of the gifts that they received. “I had heard it was a great meal, but never dreamed I was going to leave with all this too,” said one man. “I can’t thank you enough for thinking about us in this way and having this dinner for us.”

All the helpers and volunteers were given a small gift as well which included Mounds and Almond Joy candy bars, with a note that read, “Sometimes you feel like a nut…sometimes you don’t! And, without all your help, I would be nutty. Thank you for giving of your time and efforts in coming together as a family to serve our military who have served us.”

“There is no way that I could have done this on my own. It took all of us together to get it done. I thank everyone from the depth of my heart. You are very special to me and greatly appreciated. All my love,” Pam Dudding said.

As people slowly exited, everyone smiled as if to say that the event was a major success. “Thank you for asking me to volunteer. Please contact me next year, as this has been an honor for me,” were words said by many.

“So many stayed to help clean up this year and that was a wonderful blessing. I was always taught to leave something nicer than you found it. I am so very grateful and humbled to all those who helped to make this event a memorable one,” Pam Dudding said. 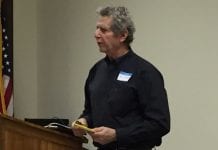 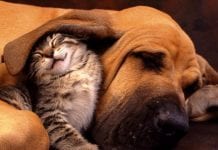 Continue to the category
eRecord